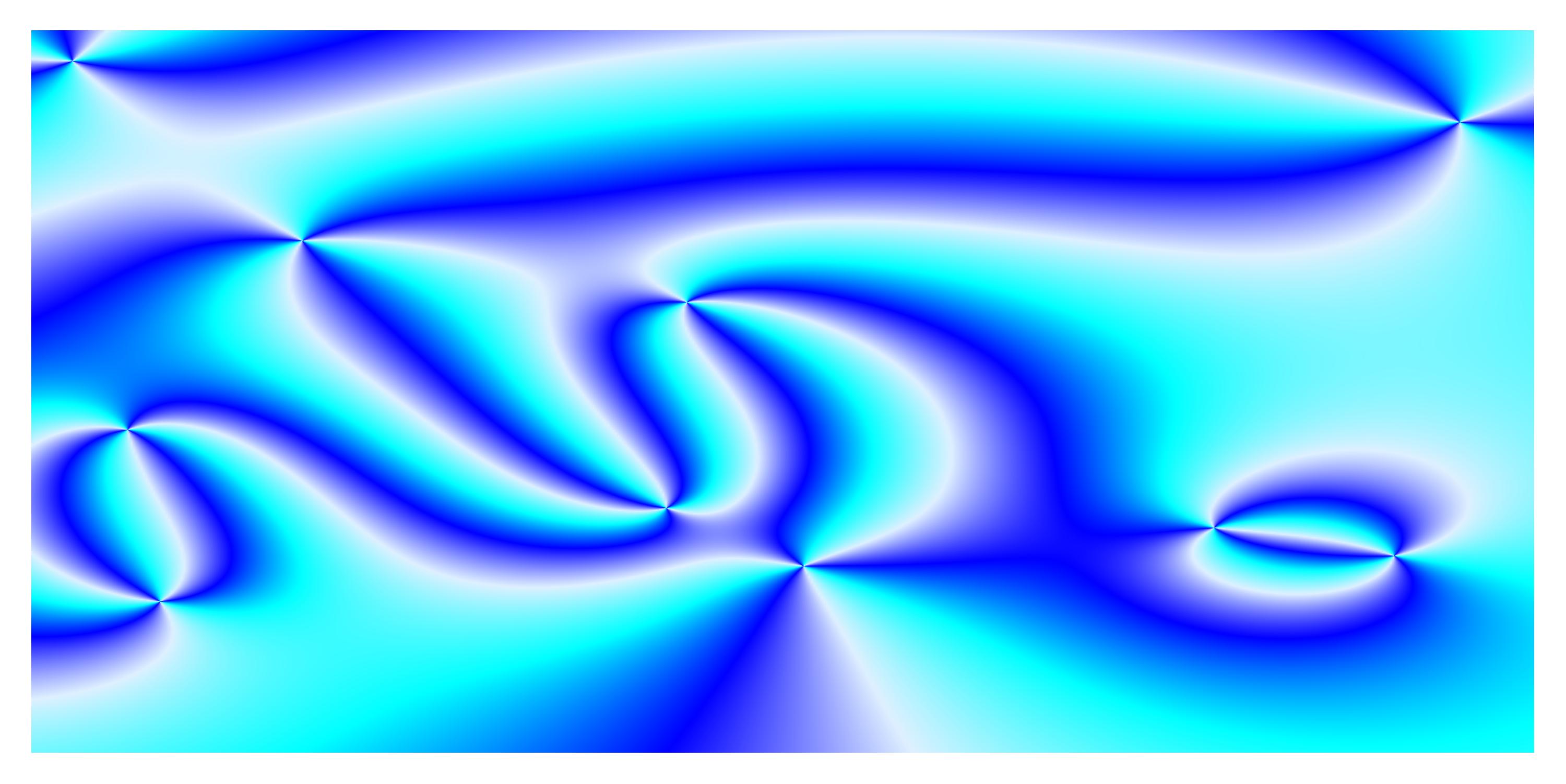 An artistic snapshot of a vortex liquid with 1/3 fractionalized charge excitations.

A classical system can have multiple degrees of freedom whose properties can be measured independently and simultaneously with arbitray accuracy (limited only by the measuring device). However, quantum mechanics allows matter to exist in a “superposition” of different classical states. A quantum system in a “superposition” state will generally have properties whose measurements have random outcomes with predictable probabilities. Then, measuring different properties of the classical states that participate in the quantum superposition yields random, but correlated measurement outcomes. Such correlations are known as quantum entanglement.

A rather remarkable form of entanglement is that between a macroscopically large number of particles. The only forms of macroscopically entangled quantum matter that we have found so far in nature are superconductors and fractional quantum Hall states. The entanglement in superconductors is saddle and properly understood only when quantum fluctuations of the electromagnetic gauge field are taken into account (it is often ignored in literature). Apart from quantum Hall states, many other examples of entangled matter have been theoretically envisioned. The most notable example are spin liquids in quantum magnets, perhaps indirectly seen in a few experiments.

Quantum Hall states are topological insulators without time-reversal symmetry. When electrons are placed in strong magnetic fields, their trajectories in the plane perpendicular to the field are circular “cyclotron” orbits. Since electrons moving in closed orbits cannot traverse large distances, they form an electric insulator. However, the cyclotron orbits can open up along extended obstacles, such as the crystal boundaries. They become “edge states” that propagate without dissipation along the boundary. Therefore, a crystal in a very strong magnetic field can conduct current only along its boundaries. The laws of quantum mechanics require that the edge currents exhibit a measurable quantized transverse conductivity, which is the phenomenon called quantum Hall effect.

The quantum of transverse conductivity is related to the electron charge, and therefore is a fundamental constant of nature that can be used nowadays to define the most accurate standard for conductivity. However, certain materials exhibit fractional quantum Hall effect, as if electrons were broken into pieces with fractional charge. The only other observed forms of fractionalization are quarks in atomic nuclei, and spin-charge separation in spin chains (and possibly above one dimension in some frustrated magnet materials). The observed fractionalization in quantum Hall states is incredibly rich, an entire hierarchy of fractions has been experimentally found and theoretically explored.

A new class of materials with strong spin-orbit coupling, known as topological insulators (TI), are bulk insulators with edge or surface conduction channels that respect the time-reversal (TR) symmetry. In that sense they are similar to quantum Hall systems, which however are not invariant under TR due to the externally applied magnetic field. Quantum Hall effect can be observed only because charge is conserved, and an analogous quantum spin-Hall effect would be observable if spin were conserved. It turns out that the Rashba spin-orbit coupling found in TI materials does not conserve spin, but brings about a new “dynamical” symmetry that can shape incompressible quantum liquids without an analogue in quantum Hall states. Such quantum liquids can exhibit new and not yet experimentally discovered topological orders with Abelian or non-Abelian fractional statistics. Various perturbations in materials can further lift the spin-related symmetries and scramble the link between bulk topological orders and edge states.

Incompressible quantum liquids are highly entangled forms of quantum matter, possibly applicable in quantum computation. They are said to have topological order whose manifestations are quasiparticle excitations with fractional quantum numbers and statistics, and ground-state degeneracy on non-simply connected spaces (like torus) that survives any sufficiently weak perturbation even when no symmetry is spontaneously broken.

The topological ground-state degeneracy on a torus is related to the energy cost of threading flux tubes through the torus openings.

A fractional TI ground state can be stabilized only by a combination of strong interactions among electrons and a strong spin-orbit coupling. One way to accomplish this is to fabricate a heterostructure device that puts a TI quantum well in contact with a superconducting material. The superconductor induces Cooper pairing in the TI quantum well via the “proximity effect”. By applying a gate voltage, it is possible to drive a quantum phase transition in the quantum well between an insulating and a superconducting state. The TI’s spin-orbit coupling significantly modifies the character of this transition and gives rise to stable incompressible quantum liquids in the phase diagram.

The TI quantum well can host electrons in two states of spin projection and two orbital states. Inter-orbital Cooper pairs can carry spin and feel the spin-orbit coupling. This produces two helical modes, one of which has energy that decreases with momentum. That helical mode can condense at large momenta and produce a superconducting state with a TR-invariant vortex lattice of spin supercurrents. The quantum phase transition out of this vortex state, tuned by the gate voltage, is generally the first-order vortex lattice melting. The resulting vortex liquid phase is an incompressible quantum liquid, a candidate for a fractional TI.

The topological properties of incompressible quantum liquids are hard to describe using microscopic models. Instead, it is more practical to construct an effective theory that gives up microscopic accuracy in favor of simplicity. An effective theory is not derived, but constructed according to certain requirements. It must have all the needed symmetries of the system it refers to. It must contain all low-energy degrees of freedom and reproduce their known classical equations of motion. Otherwise, its form should be the simplest one that can capture all universal aspects of dynamics (independent of the system’s microscopic details). The Standard Model of elementary particles is an effective theory in this sense, as well as any Landau-Ginzburg theory of a second order quantum phase transition. Even though effective theories are not derived, they can explain certain experimental observations at the quantitative level.

An effective theory of quantum Hall states is the well-known Chern-Simons (CS) theory. This is a gauge theory in which the physical particle densities and currents are represented by the curls of an auxiliary dynamical gauge field. The CS theory is constructed by the requirement that its equations of motion reproduce the experimentally observed relationship between the electrons’ density/current and the external magnetic/electric fields in quantum Hall states. The most general form of this theory can classify many quantum Hall states, qualitatively describe their properties and predict various features of the edge states.

The CS theory is very general, but it does formally rely on the conservation of “charge” that is coupled to an external gauge field. Electron’s electric charge is coupled to magnetic fields and conserved. Electron’s spin is similarly involved in the spin-orbit coupling which can be described by an SU(2) gauge field with a non-trivial “magnetic flux” (the SU(2) gauge fields are also used in the theory of weak nuclear interactions). If this SU(2) gauge field conserved spin, its quantum spin-Hall states could be readily described by an appropriate CS theory. However, the Rashba spin-orbit SU(2) gauge field is non-commutative and consequently does not conserve spin. A generalization of the CS theory is needed to capture all potentially existing incompressible quantum liquids shaped by spin-orbit couplings.

The generalization of CS theory is a Landau-Ginzburg theory of spinor fields enhanced by a topological term. The topological term has the SU(2) symmetry and captures topological orders of arbitrary incompressible quantum liquids in the continuum limit with that symmetry. It reduces to the CS theory when spin is conserved. The full effective theory, however, is capable of describing both conventional and topological states of quantum matter, including novel topological orders with Abelian or non-Abelian statistics that have no analogue in fractional quantum Hall states.