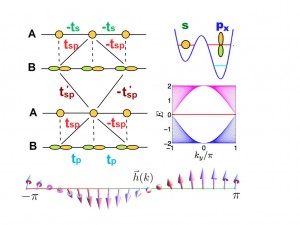 Understanding the quantum phases of interacting fermions is a fundamental, chanllenging problem in many-body physics. Broken symmetry phases, such as spin density wave order in antiferromagnetic metal Chromium, or the p-wave superfluid order in liquid Helium 3, have long been known and well understood. Motivated by recent experiments, we find theoretically that an unconventional spin-density wave phase with p-wave orbital symmetry in ultracold Fermi gases of polar molecules and magnetic atoms. It is a kind of magnetic order formed on bonds connecting the lattice sites, and can be viewed as the particle-hole analog of p-wave superconductivity.

Chern Numbers in Time of Flight

Synthesis and characterization of magnetic nanostructures is an important aspect of research in nanoscience.  In order to improve the characteristics of nanomaterials based devices, it is important to understand the structure property relation as well as the mechanism of the magnetic ordering. The goal of our research is to investigate the suitability of nanostructured magnetic materials  for applications in high density magnetic data storage such as magnetic tapes, and hard disk media. Some of these nanostructures are rodlike metallic iron nanopartcles g-Fe2O3 nanoparticles,  PZT thin films with Co nanostructures,  Co/Fe multilayers, core-shell structured FePtM (M= Au, Cu) nanoparti nanoparticles. The orientatonal ordering of nanostructures are investigated using small angle neutron scattering, and element specific magnetic behavior  is determined using x-ray magnetic circular dichroism spectroscopy.

Currently focused on rare-earth based solid state quantum memory and quantum computation, which are the important components in developing quantum information science and technology.  The research also include investigation of laser spectroscopic properties of rare-earth ions trapped in inorganic crystal lattice at cryogenic temperature, the coherent and incoherent processes under the excitation of composite laser pulses, and the influence of the static electric and magnetic fields. Study of these processes provides the information needed to understand and control the physical systems to demonstrate quantum memory and robust quantum logic gates. Research activities involve both experiments and theoretical modeling. Student research projects are currently carried out at both graduate and undergraduate levels.

Ultracold gases refer to quantum degenerate gases of atoms (such as Rubidium, Potassium or Lithium) or molecules confined in vacuum by laser beams and cooled down to nano-Kelvin temperatures (one billionth degree above absolute zero). These systems offer well-controlled settings to test and advance our basic understanding of the collective behaviors of strongly interacting quantum particles. They can be viewed as the latest breed of quantum matter, trailing a long line of extraordinary examples such as superfluid helium, high temperature superconductors, and antiferromagnets. The research is aimed at expanding our knowledge about quantum phases of matter, and gaining insights for better design and manipulation of quantum materials. We are particularly interested in the quantum phases of Fermi gases in new parameter regimes brought by ongoing cold atoms experiments. Examples of research topics include the exact thermodynamics of low dimensional Fermi gases, topological phases of cold atoms on high orbital bands, as well as the phase diagrams of dipolar Fermi gases. This line of research is currently supported by National Science Foundation, Air Force Office of Scientific Research, and National Institute of Standards and Technology.

Superconductivity is a hall mark macroscopic quantum mechanical phenomenon. At low temperatures, many materials become superconductors with vanishing electrical resistance. Moreover, (weak) magnetic field gets expelled from the bulk. A conventional superconductors can be thought as a “perfect” quantum fluid of pairs of electrons, loosely bound together by some attractive interaction between electrons, all sharing the same quantum state. Superconductor has become a leading competitor in building new architects of quantum devices, circuits, and qubits (the fundamental building block for a quantum computer). Our research focuses on superconductors driven out of equilibrium, especially in spatial inhomogeneous systems as found in devices. The goal is to understand the collective, quantum mechanical dance of many electrons when they are driven out of equilibrium. Modeling the dynamics of charge, spin, and energy flow requires techniques such as quantum field theory and nonequilibrium statistical mechanics. Currently, our group is actively studying the hybrid structures of superconductors and topological insulators or other spin-active (magnetic or spin-orbit coupled) materials. Research in this direction may contribute to the next generation quantum devices and circuits that outperform present technologies.

The Magnetic Resonance Laboratory (MRL) is directed by Dr. Karen L. Sauer, of the School of Physics, Astronomy, and Compuational Sciences. The research of MRL seeks to understand and exploit spin-dynamics in such systems as nuclear quadrupole resonance and optically pumped atoms. In addition, we conduct research to push the noise in such systems to their fundamental limit, to reveal the full capability of magnetic resonance at low-fields both as an analytic tool and for the detection of contraband substances.