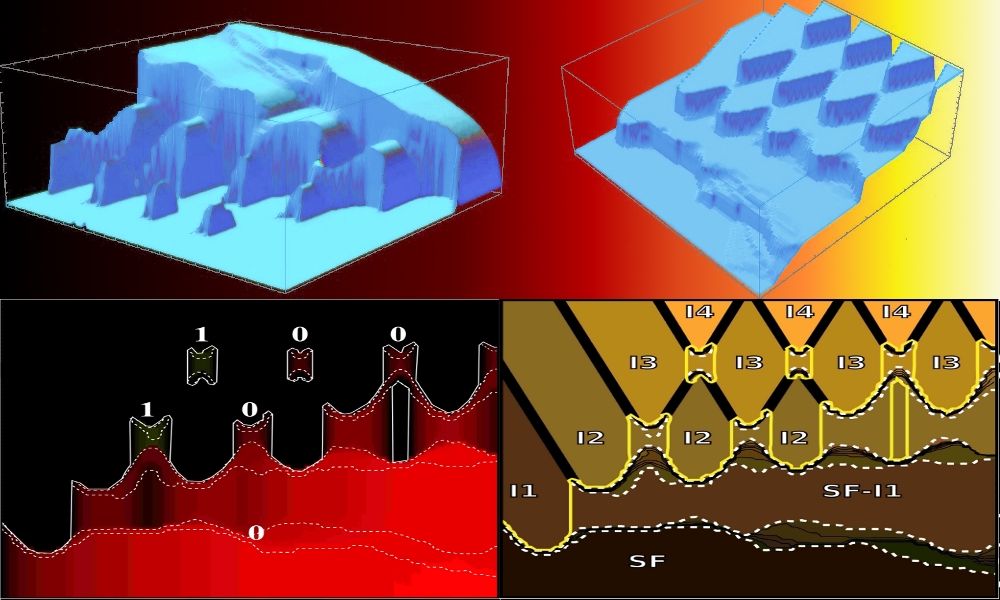 In recent years, atomic physics has opened a new frontier for the exploration of strongly correlated many-body systems. Atoms can be cooled to sub-nanokelvin temperatures, trapped in a small volume and placed in artificial crystalline potentials or electromagnetic fields created by lasers. Furthermore, interactions between atoms can be controlled. This enables simulations of electronic materials with more ideal properties than found in nature, and testing or developing theories of condensed matter in a new environment. Novel forms of quantum matter can also be engineered using ultra-cold atoms. A notable example is the superfluid of fermionic atoms in the unitarity limit, which occurs in the crossover between the Bose-Einstein condensate (BEC) of diatomic molecules and the Bardeen-Cooper-Schrieffer (BCS) superfluid of Cooper pairs. Such superfluids have universal properties, independent of microscopic details like the structure of atoms and interaction potentials. Owing to universality, field-theoretical methods can be effectively used to both gain physical insight and make accurate quantitative predictions near unitarity.

The fundamental zero-temperature phase diagram of fermions with short-range attractive interactions contains two phases: superfluid and insulator. The strength of interactions can be characterized by a quantity called “detuning from the Feshbach resonance”, which is equal to the negative inverse of the atom-atom scattering length. At zero density and zero detuning, there is a quantum critical point, the zero-density Feshbach resonance. The properties of interacting fermions are universal in the vicinity of this critical point, the so called unitarity regime. For example, in the low density limit near unitarity, critical temperature is a function of only the density.

Application of a Zeeman field (h) to a fermionic superfluid introduces tendency to create a population imbalance between the two types of fermions that form Cooper pairs or molecules. The fully paired superfluid normally resists this tendency until it is destroyed in a first order transition at a critical value of the Zeeman field. Sometimes, however, unusual phases may be obtained first, in which superfluidity coexists with a Fermi sea of unpaired atoms, and potentially spontaneously breaks some symmetry. Proposals have been made for phases with nematic and smectic (FFLO) order, and ongoing research attempts to identify circumstances in which such phases might occur and be experimentally detected.

Crossover Between Band and Mott Insulators

Placing ultra-cold fermionic atoms in optical lattices (created by interfering laser beams) opens countless possibilities for simulating condensed matter systems, such as Mott insulators and high-temperature superconductors. The generic phase diagram at zero temperature contains superfluid and insulating phases at various densities (see below). We have shown that band insulators smoothly evolve into Mott insulators as the detuning is varied, similar to the smooth evolution of superfluidity from the BCS to the BEC regime. Future research includes searching for Mott insulators with arbitrary fractional density, as well as supersolid phases. Such phases, which would break lattice symmetries, might be expected near unitarity due to the extended range of effective interactions in an effective multi-band tight-binding model.

Pair density wave (PDW) is a quantum state of Cooper pairs that spontaneously breaks translational symmetry. The simplest PDW is a superfluid “condensed” at a finite wavevector q, a non-magnetized version of the FFLO state. A surprising result that we obtained is that the pairing instability of a generic band-insulator, caused by sufficiently strong short-range attraction, leads to a PDW superfluid, rather than the conventional superfluid that respects all lattice symmetries. This is a consequence of the intricate interplay between intra-band and inter-band pairing. From the field theory perspective, it is related to a non-analytic dependence of vertex functions on the particle crystal momenta in non-tight-binding lattice potentials. While this phenomenon is quite generic, its observation is practically possible only in appropriatelly engineered cold atom setups.

The PDW instability obtained from the mean-field approximation, and even semiclassical perturbation theory of arbitrary order, generally occurs at a wavevector that is incommensurate with the underlying lattice potential. Such a PDW would be highly frustrated, so we expect that the quantum fluctuations of topological defects (vortices) ultimately stabilize PDW ordering at a commensurate wavevector. A related natural possibility is that commensurate PDW Mott insulators can be stable adjacent to the PDW superfluid phase. Such Mott insulators would fundamentally involve multiple orbitals, such as in an orbitally ordered density wave.

Neutral atoms can be subjected to velocity-dependent forces that have the same effect on their motion as magnetic field on electrons. This can be accomplished by rotating an atomic cloud very fast, since the Coriolis force in the rotating frame of reference has the same mathematical description as a uniform magnetic field. More recently, transitions between internal atomic states induced by Raman scattering of laser light have been used to synthesize an artificial magnetic field, and even an SU(2) gauge field (spin-orbit interaction). The latter approach is especially promissing for achieving macroscopically entangled topological states of cold atoms, known as fractional quantum Hall states.

A fermionic superfluid allows external (artificial) magnetic field to pass through it only in the form of localized flux tubes, or vortices. A vortex is the supercurrent flow that circulates around a core depleted of atoms (singularity), and the amount of magnetic flux associated with it is quantized. Vortices interact with one another and arrange themselves into a lattice, typically honeycomb. When quantum fluctuations melt this vortex lattice, the syperfluid state is destroyed in favor of an insulating quantum vortex liquid. This is an exotic topological state of Cooper pairs, possibly related to the “pseudogap” state of high-temperature superconductors in strong magnetic fields.

A combination of strong (artificial) magnetic fields and Zeeman effect can produce a rather rich phase diagram of vortex lattices, vortex liquids and topological band insulators (integer quantum Hall states). When Zeeman effect favors a large spin magnetization in a paired superfluid state, the excess magnetic moment can be stored only in vortex cores, so that additional vortex-antivortex pairs may be nucleated in every unit cell of the vortex lattice. The result is known as a vortex Fulde-Ferrell-Larkin-Ovhinnikov (FFLO) state. The figures below illustrate the rich phase diagram of two-dimensional fermionic particles with short-range attractive interactions in magnetic field, whose dynamics is shaped both by the orbital and Zeeman effects.

Lattice potentials imposed on interacting fermionic particles give rise to multiple universal regimes controlled by scattering resonances. Low-energy quasiparticle excitations of a zero-temperature band-insulator can be “particles” and “holes” that live at multiple symmetry-related wavectors in the Brillouin zone. Injected quasiparticles can resonantly scatter in Cooper and exciton channels, and form bound-state Cooper pairs or excitons respectively when interactions are strong enough. Pairs can be intra-band, inter-band, or formed between excitations at different wavevectors. This results with a variety of ordered phases, which can be superfluids, exciton condensates, charge and spin density waves, all of which can cross over between their weak-coupled (BCS) and strong-coupled (BEC) limit. Experimental realizations of tunable microscopic models in which these scattering resonances occur are possible with cold atoms in optical lattices tuned to finite-density lattice Feshbach resonances, but the universal aspects of their physics yields insight about solid state materials as well.

Whenever lattice fermions are tuned near a scattering resonance, their dynamics is universal and can be captured by a quantum field theory. The main method of calculations in field theory is the perturbative expansion, which is often plaqued by the lack of a small expansion parameter in descriptions of correlated states of condensed matter. However, focusing on a scattering resonance is mathematically very convinent because the unperturbed ground state is a band-insulator, a state barely different from vacuum by its dynamics. Many types of conventional and unconventional ordered phases of lattice fermions encountered in solid state materials can be reliably studied using field theoretical techniques by perturbing about scattering resonances. A particularly interesting insight is obtained by a renormalization group analysis about the pseudogap state of high temperature superconductors.

Transitions between ordered phases and featureles insulators in the weak-coupling limits are always of the pairing (BCS) kind. This means that the insulator is a band-insulator, and the ordered phases arise as pairing instabilities of the Fermi surface. However, the transitions in the strong-coupling limits belong to a bosonic universality class, XY or mean-field depending on whether there is particle-hole symmetry or not. This implies that the strong-coupled insulator adjacent to an ordered phase in the phase diagram is a “correlated” Mott insulator. Such a bosonic insulator of Cooper pairs or excitons is devided from the band-insulator either by a phase transition or a crossover depending on whether it breaks some symmetries. It turns out that in two spatial dimensions only bosonic transitions are possible and necessitate the existence of “pseudogap” Mott insulators when fermionic excitations are naturally gapped, as in our lattice model with Fermi energy sitting in a bandgap. Such insulators can exhibit vortex-driven transport out of equilibrium, of nature much similar to that claimed to occur in cuprate high temperature superconductors. While our model is substantionally different than cuprates, it does indicate that some phenomenology of pseudogap states may be related to quasi two-dimensional dynamics (electrons most readily move in copper-oxygen planes in underdoped cuprates) and low energy Cooper pairs that fail to superconduct due to strong quantum fluctuations.